The 2017 Summer Games of Oklahoma

My stomach ties itself into a knot. Or butterflies hit the lining at record speeds. Either way, you imagine it, I’m anxious as hell as I walk into Climb UP gym.

Today’s the day for the Summer State Games of Oklahoma. I should be looking forward to competing, but part of me doesn’t feel ready. Thankfully, my husband is with me for support. I find the sign-in table to check-in and grab my scorecard. I’m climbing in the women’s recreational category again. Then quickly walk into the gym and start gathering beta. 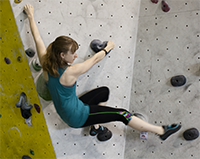 As I look at the newly set problems and routes, more nerves creep in. Many competitors are already here, checking out the layout also. Somewhere between 70-80 people are participating in the event. After making a loop around the gym, I grab my shoes so I can warm up on the big boulder since I don't see tags for the comp.

I pick easy problems to climb on, but I don't top out. In my mind, doing so would waste too much energy I’ll need for later. When I'm done, I find my husband and tell him I’m going to listen to music and chill. I grab my phone and earbuds from my backpack, but I'm interrupted by the announcer over the intercom stating instructions will be given in 3 minutes. Maybe I’ll get one song heard.

Ten minutes before go time, the announcer gives us the low down on the new format for the State Games. Like red-point, we’ll get 3 hours to choose which problems and routes to do. Plus, complete the speed routes also in that time. For the bouldering and roped portions, we are allowed ten attempts on each one. All the climbing will count towards ranking.

The bouldering part is almost the same from previous events. However, we'll climb only the problems on the high-ball wall. The big boulder is off limits. For the roped part, we’ll climb toprope. Only advanced category climbers can lead climb. If you fall off a route, you are lowered and counted as an attempt.

The speed routes are different. One will have two routes to climb. She or he can have one practice run beforehand if she/he chooses so. The objective is to hit the cowbell at the top of the route to signal completion. The fastest speed from the two routes will be your recorded speed.

When the instructions finished, we are free to climb. 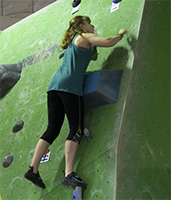 My plan is to alternate between the routes and problems, starting with the easiest first. This method should help me not tire out too much from either group. The first couple of routes I climb are fun. Now it's time to switch to bouldering after taking a water break.

I'm still nervous about climbing on the high-ball wall even though it’s the one big thing I’ve been practicing. I manage to push my feelings aside and knock out the two easiest problems. They weren’t bad at all.

The speed routes are next on my list. I want those out of the way before I'm too tired to climb them. They're autobelay routes in what I guess are in the 5.5 to 5.6. range. I do a practice run then climb the two for real. I think I did well. I’ve never done speed climbing before, besides occasionally racing my friends on the autobelay routes.

At this point, I need to climb a few more problems. My problem is, I'm feeling up to it. I would rather climb more routes instead. Oh, the irony. I express my feelings to my husband, and he gently pushes me to do more problems.

We look at a couple he knows are in my range. He tells me “I think I could do those. And if I think I can, I know you can.” Well… Okay, I’ll do them. It takes me a while to muster enough guts to do them since fear is ganging up on me. 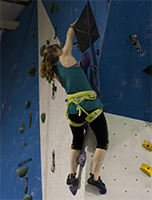 The next two problems are a little harder than the ones I did earlier. On both, I did freak out some as I climbed higher on them. Out of the two is black one I have a harder time with because part of it requires walking across a narrow wooden beam. Nevertheless, with some persistence, I sent. I feel relieved after that.

Soon after taking a break, I switch back to the routes. I send some of the harder ones. Two other hard routes I try kick my ass. They require big moves I almost have to dyno to get. I guess I'm not sending them today.

I play around with some more problems and routes I know I won’t send before time is up. I could tell I'm getting tired and need to stop soon, but I want to try them. When time is up, I turn in my scorecard and wait for the awards.

And the Results Are

The awards come and go. I didn’t medal. I feel slightly disappointed I didn’t. However, this time there are more women in the recreational category competing against me. Although, there are good things that happened: I didn’t fall off the high-ball wall and I didn’t get hurt.

So, the day after comp I look up where I was in the ranks for recreational. It turns out I was in 4th place. They broke down the climbing categories. I tied for 3rd in bouldering. What surprises me is I tied for 1st in roped. Woohoo! But what kils me is I was 6th in the speed category. Damn.

Just for fun, I compare my scores to the women in the intermediate category. With what I had, I would have been in 3rd place (if you ignored my speed score). I don’t think that’s shabby.

Overall, I’m content with my performance at the State Games. I had a good learning experience with the new hybrid format. Not only that, but I had fun which is what comps are supposed to be. Now, I’ll have things to remember and work on for the next winter games.