Back to Climbing Again

Ah, the sounds of bouldering. Two to three weeks ago, I bouldered for the first time at Summit Norman since mid-March before Summit shut down due to pandemic.

I went in with a blank slate because hell, I haven’t been climbing in a while. I’m not sure what to expect. Plus, all the walls have new problems to climb. Also, I didn’t know how well I would handle climbing with a mask on since it’s the rule that you must wear one on and off the wall.

I picked a morning appointment, so there hopefully wouldn’t be many people around. There was a 6-foot rule instated, but I was still kinda nervous climbing around others. To start, I hopped on to easy stuff to get warmed up. I found out climbing with the mask wasn’t too bad if I take more breaks to catch my breath.

After feeling ready, I eyed the reds (V2-3) and blues (V3-4) in my area and began climbing. It went well despite not bouldering for almost two months. I flashed some reds, woohoo! Then I worked on some blues, I didn’t send them, but that’s ok especially for my first day back.

Also, I attempted a few oranges (V4-6) and even a purple (V6-8) because it looked like fun. That problem is now my new project for a while, or at least until they reset it. I didn’t realize it until the middle of the session, how much I missed climbing.

I have also toproped since Summit Norman has opened back up. A friend and I met up at Summit Norman to see how well we would do at roped climbing. After warming up on some easy 5.6-5.7s, we moved up to the 5.9-5.10s. I was going in with a blank slate as well. I know I can do 5.9s, the 5.10s depended on the route and style.

The first 5.10c was on a slab wall. Slab climbing is something I’m not good at yet. I had to redial my beta while on the wall because I fell off when the original plan didn’t work. But I got the rest of it. Yay!

Next, we got gusty and hopped on a 5.11a. It was on a vertical wall, but I saw a lot of back, and forth body movements going up the route. When I started climbing, the route was burlier than I expected. I fell more as well.

We moved to another area and climbed a 5.10b. We were starting to feel the pump afterward. But I saw a crimpy 5.11b that looked fun and challenging. I told my friend if I could get to the second clip on the route, I’d be happy. Because from there, that’s when I could see it getting hard.

So, I started climbing the 11b. The holds were small but decent. I reached my so-called end goal. From there, I wanted to see if I could make the next few moves without pumping out. I see an excellent hold attached to a textured volume, but it’s sorta out of reach. I managed to get my feet higher on the holds and moved toward the volume. My left hand landed on the side of it, and I press hard against it as I grabbed the hold with my right.

To stay put, I matched both hands on the hold since it was possible and attempt to get my feet stable. The footholds sucked, so I needed to be sure I was sticking to them. Unfortunately, I wasn’t. I reached for the next hold away from the volume and fell. However, I managed to move and get it the second time. From there, it was almost smooth sailing sending the rest. 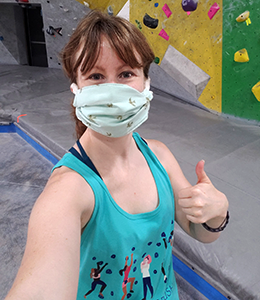 Coming down, I was so pumped! But so proud that I made it to the top even with the fall. My first day back, and I’m already attempting 5.11s. 😊 Now I need to link up the routes I fell on, but that will be for another day.

One observation I made from the bouldering and toprope sessions is that the training I’ve done over quarantine (#quarantraining) is starting to pay off both physically and mentally. (Thanks, Lady Beta Coaching!) I’m going in with no expectations besides trying hard, having fun, and learning from my climbing. I’m climbing with breaks for almost the 2-hour appointment without leaving completely dead. Yes, after bouldering, I was sore as hell the next day. But after TR, I was a little but not that bad.

I do see some of the things that were holding me back in my climbing creep up a little, and I acknowledge them now. But I’m learning not to let them ruin my fun. It will be a process, that’s for sure, but it’s something I want to accomplish.

I’ll keep you updated with how my climbing is going and have more pictures too. I do wish I got a video of climbing the 5.11s. But I’ll try to remember to record them the next time I TR. Until next time, happy bouldering!