Chalking Up: Keeping Your Hands Dry

Bags of climbing chalk at crags and climbing gyms are an ordinary sight. White powder covers the hands of many climbers alike. Who knew this fine or chunky substance would help improve grip on rocks?

Chalk or magnesium carbonate is an inexpensive tool to help reduce hand sweat before and during climbing. Chalk absorbs the sweat and oils from your hands. This leaves a rougher surface behind help with gripping. The less sweat you have, the better friction gained. It works well for this purpose.

History of Chalk Use in Climbing

It’s written in Bouldering Movement, Tactics, and Problem Solving by Peter Beal that climbing legend John Gill is credited with introducing gymnastics chalk in the mid-1950’s to climbing. Chalk is used for other sports also such as lifting and aerobatics for the same purpose. The use though didn’t pick up steam until the late 1960’s or early 1970’s. Since then, climbers have been carrying bags of chalk up routes or leaving them next to their pads while bouldering.

There are 4 forms of chalk used for climbing.

Block chalk is what one would imagine. A solid cube of chalk one crushes into a powder or to their preferred texture to cover their hands. However, crushing these from what I’ve read can be messy. Plus, it might be too big to fit in a chalk bag. So, one would have to break it apart anyway to take it climbing. Some say these give the best coverage of chalk for your hands and can be the cheapest in terms of price.

Loose chalk is chalk that’s already been ground up. The consistency of loose chalk can range from chunky to a fine powder. The chalk usually comes in a reusable bag or sometimes what’s called a chalk bucket. They are basically bigger chalk bags but they stand more upright. This type of chalk is commonly seen at the crags and climbing gyms.

One of the downsides with loose chalk is like the block, it can be messy too. Due to its fine substance, the chalk dust can get everywhere if not secured properly and it spills. It’s best to keep chalk in a sealable bag or container when in use.

If you’re wanting to use loose chalk in a climbing gym, check to see if the gym allows it. I’ve heard some don’t because it’s a pain to clean up. I think Climb UP is one of them. So, ask before bringing some with you to your next session.

Chalk balls are porous fabric socks filled with fine loose chalk with a closed end. The socks are to help minimize excess chalk from escaping. Some kinds are refillable. Cost-wise, these are affordable. This type of chalk is preferred in many climbing gyms because it’s the cleanest type.

A downside to the chalk balls is one can’t get a thick coat of chalk from rubbing them. Another is like loose chalk, one should carry them in an enclosed chalk bag or bucket. Because the chalk dust can get everywhere also. (You can see there’s a theme here with messiness and chalk in general.)

By definition, liquid chalk is magnesium carbonate mixed with alcohol. It comes in a tube that you squeeze to extract the liquid and rub onto your hands. After the alcohol evaporates, a layer of chalk is left on your hands. People claim that liquid chalk stays on your hands longer so you don’t need to chalk up as often. Thankfully, there’s no mess that comes with it like the others.

However, liquid chalk can be pricey. So that’s something to keep in mind when checking out chalk. Plus, from what I’ve heard, it doesn’t smell pleasant. Whereas the other types of chalk don’t give off an odor.

Which One Do I Use?

Since I’ve started climbing more frequently, I’ve used a chalk ball to keep my hands sweat free. My husband gave it to me with a chalk bag as Christmas gifts in 2015. So, mine has lasted me a while.

I like using my chalk ball. In terms of coverage, it does well for the most part. But I can see at times where it doesn’t give me enough to work with. It’s small but convenient to have, especially for bouldering.

However, I’ve noticed the chalk is getting low. I recently decided to try a few of the other types to see what I liked or didn’t. Or stick with the chalk ball and get another. 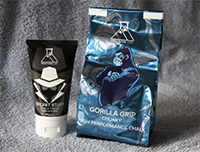 Recently I bought Friction Labs “Gorilla Grip” chalk. The Gorilla Grip is a chunky loose chalk that one can break up the bigger chunks if need to for more of it. Plus, I bought their “Secret Stuff” liquid chalk also. I read reviews stating they were good products to use. Therefore, I decided to buy those two. 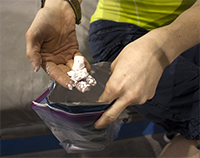 I bring both to Climb UP for a session. I try the Gorilla Grip chalk first. After opening the bag, I break a small chunk of the chalk up then rub it on my hands. I notice how much thicker it is compared to what’s in my chalk bag. My hands look like ghost hands after covering them with it. What’s surprising is how smooth the chalk feels on my skin. 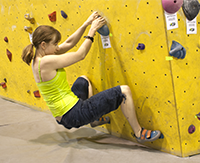 To test the chalk, I decide to climb 2-3 problems to see how well it stays on my hands. It’s hot in the gym so my hands were likely going to sweat. That was another test to see through.

As I grab onto the holds, the chalk seems to stay on. I don’t notice if I was losing chalk or not. After sending, I check my hands to see how the chalk was doing. There appears to be a fair amount still on them. This was good. The Gorilla Grip held on well even after climbing for a while.

While resting, I wash my hands so I could try the Secret Stuff next. I admit, whenever I see or hear its name, I think of the cartoon character Secret Squirrel or “Mike’s Secret Stuff” from the movie “Space Jam”.

I squeeze out the chalk from the tube and a white liquid comes out. I use a pearl-sized dollop and it covers my entire hand as I rub them together. The alcohol rapidly dries and I see the chalk appear on my hands. It’s cool to watch it do that. I take a whiff of the chalk and yes, it stinks.

Likewise, what I did with the Gorilla Grip, I do while wearing the liquid chalk. I pick out 2-3 different problems and climb those to test it. I didn’t notice the chalk coming off either while climbing. My hands still look ghostly white after I finish them.

I like using both types of chalk. Here are the pros and cons of the chalks. 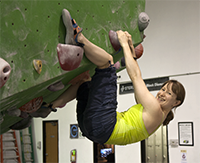 Overall, I didn’t see big differences between the two types in terms of performance. I might not be testing them long enough to really see which one works better. I do think both have better coverage than the chalk ball though. I think either one is good to use. So, I might switch to one of them after I completely deplete it.

To conclude this post, I hope you found this information helpful if you are deciding to buy chalk for climbing. I might post an update later down the road and possibly have better results between the chalks. Until then, happy bouldering!