Ever get an itch to go visit a different climbing gym? It’s been too long since I’ve done that. Well, this past weekend, that changed. 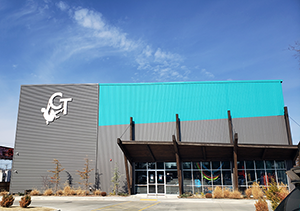 Some friends invited me to check out Climb Tulsa in Tulsa, OK. It’s a little over a 2-hour drive from me. However, I thought since I had most of the day off, I would head up and climb.

It’s a climbing gym located in the north-central part of the city and its reasonably easy to find. When I arrived, I thought the gym looked kinda small. But when I walked in, I was wrong. I didn’t realize it was a 2-story building. The roped walls are at least 50-feet tall with many toprope and lead routes. 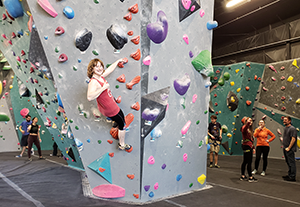 During my gym, I was shown that their bouldering area is on the second floor. I decided to boulder before my friends got there because I was there a little early. The walls are a bit taller than at Summit Norman. I would say at least 16-17 feet tall.

Most of the walls are slab-like, so less than vertical. Slab isn’t something I’m great at, but it was worth climbing and see how well I would do. There is a bouldering cave with overhung stuff, but it was busy, so I tried other walls. The problems are harder than Norman’s but entertaining.

I sent some, which was an improvement, others I had to down climb because the height was sketching me out. Some of the problems were reachy or had a lack of footholds. Those weren’t short-person friendly.

After my friends arrived, we bouldered for a bit then switched to toprope. I’ve been warned the toprope grades were harder than Norman’s as well. So, I wasn’t going to hop on anything hard. My friend Leah wanted to climb a crimpy blue 5.9 route inside a chimney formation, so I belayed her until she hit the #strugglebus and decided to switch to a pink 5.9 next to it after I lowered her back down. The pink route also was a struggle and decided to hold off.

I have no idea why, but I wanted to climb the pink 5.9 Leah attempted. So, we switch, and I go up. The beginning has excellent holds, and the feet are good as well. However, about a third of the way up, the sequence gets weird.

Going Up the Chimney 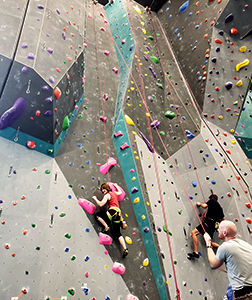 The thing about chimneys is that you use holds on both or all sides. On this route, they begin to spread out. I attempt to do a split, can’t stick it, and need to stop. Welp, I’m stumped.

A couple of guys were watching me down below and offered Leah beta, who relayed it to me how I need to get through the next part. Basically, lean to the left and push down with my left hand, move my feet up so I’m walking sideways, then reach over to the next hold with my right hand that’s above my left.

Surprisingly, it worked! The rest of the route sequence forced many similar moves to what I did earlier and some semi-splits. At one point, I mentally said, “screw it” and pulled myself up (think pullup) to get my feet over and higher.

I didn’t fall, but I did take a lot of breaks. It was so worth it when I reached the top and came down. My hips hurt from the route, but I was glad I did it. It was so much fun! 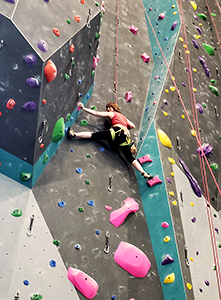 Once I was back on the mats, I was kicking myself for not getting pictures or videos of it because, in my opinion, it was epic. Later, I mentioned it, and my friend Charlie said, “do you want back up and get a few?” I said, “sure, why not?” So, we waited for a couple of people to finish the route then clipped in.

Charlie belayed me while Leah took pictures. I got maybe halfway up to get the shot, and she yells, “go just a little higher so we can get the split!” My hips slightly protested as I got into position. We got the shot, then I came down and had to head out.

Climb Tulsa is a fun gym to climb. The staff is friendly, and the atmosphere is welcoming. There’s a lot there for people to do and for all ages. I do recommend checking it out if you get the chance. I wanna go back and climb some more. Until next time, happy bouldering!