Fall Gathering, here we come! Last Friday, my friends Jenny and Ashley picked me up, and we drove west to Quartz Mountain nature park. We’re attending the Quartz Mountain Fall Gathering, an annual gathering of fun rock climbing and camaraderie. This year’s event is our first time going, and we’re excited to be there.

Two and a half hours later, we pull into the park. Quartz looms in-front of us. This mountain is the westernmost peak of the Wichita Mountains range. Over 2,000 feet of sand-colored granite for us to climb. As I gaze at the mountain, I notice the smooth and round rock formations one would see in photos in nature or landscape magazines. Quartz is quite a beauty.

We decide to set up camp before exploring the area. While pitching our tents, one thing we notice is that there aren’t many cars in the parking lot. We figured we arrived earlier than the rest of the people who were attending.

Scouting the Mountain Out

After we finish setting up, we head to the trails near the base of the mountain. The paths lead us through golden trees full of autumn color. They looked like they were from a scene in a painting. It was almost as if the trees came from a fairy forest.

We hike around the western and southwestern faces of the mountain. At the base, we encounter medium-sized boulders we could scramble over to ascend higher. As we take an imaginary path, we find big pieces of snakeskin in a crack. They were cool but also a warning to us that there could be one around. We get to a spot where climbing the rocks without some help wouldn’t be advisable, so we turned around and headed back to camp.

When we reach camp, we find friends from Texas Ashley and Jenny know, and I get introduced to them. They seem like cool people. That night we hang out and somewhat plan which routes we want to climb the next day.

Morning comes early after a night of little sleep. I eat breakfast, grab my gear, and head to the mountain with Ashley, Jenny, and their Texas friends. I look forward to sending some routes.

The ascent to the crag is hard, and I wasn’t expecting it. To reach it, you scramble over big boulders to get there. That’s not easy with a full and heavy bag of gear. I had my camera and climbing stuff, with food and water in my backpack which contributed to some of the weight. Luckily, I had help in the trickier spots to climb up them. 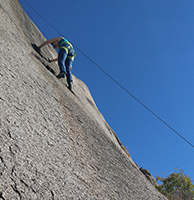 Once we get to the crag, the group decides which routes we’ll anchor and where we’ll put down ropes. These routes are on slab faces: hard and slanted rock with little to grab. Also, most of the routes on Quartz are on slab. One must trust the feet more than the hands to send them. This rock is very different than what I’m used to climbing.

My first route is called “Who’s Got the Juice?”. It’s a 5.7. Slab climbing is a completely new experience for me. I try trusting my feet as I ascend and subconsciously grab anything in sight. It feels like I must palm my hands onto the rock and almost lay on it to keep stable.

As I climb, I scan the wall for anything I can put my feet on; it’s hard to see what’s usable. There are tick marks on the rock to indicate where to put feet and hands, but I can’t see them well. Also, I’m nervous that I’ll slip and hit my face on the wall. Delightfully, I don’t and send it. Woohoo!

After taking a break, I try another route called “Accidents May Happen,” a 5.9. (How climbers come up with the names for routes is beyond me.) This route was harder and a little easier in some spots than the previous one. It was challenging overall which I expected, but this route at least had a few more holds to grab. I sent it without slipping. Now, I have two slab routes under my belt!

I hoped to climb a third route, but by then it was mid-afternoon and getting hot. There wasn’t a lot of tree cover at the crag to keep cool. Plus, I didn’t want to get sunburned and heat exhausted. I met up with Ashley, and we took a different path back to the camp. However, it was still a pain to get down the base of the mountain because of the boulders.

After getting back to my tent, I looked at my palms. The bottoms of them were raw and sore from climbing on the granite. But, the redness and the bruises were proof of what my hands accomplished today.

However, my day of accomplishments isn’t over yet. What happens later that afternoon is one of the scariest and possibly craziest things I’ve done in my life. You can be the judge of that. In the second part of “Climbing Quartz Mountain,” I partake in a Quartz tradition that pushes me to my mental limits.