Little did I know what was ahead for me as the day went on at the Fall Gathering. Later that afternoon, we’re rounded up and told head to Quartz. We’re also asked to bring our climbing shoes, harnesses, ATC, and headlamps with us. We'll be participating in a Quartz Mountain tradition; we’re ascending Snakes Head.

To the top of Snakes Head is a 300-foot climb. The tradition is we’re doing the climb unaided which means we’re not using any climbing protection to send it. Before starting up the mountain, we stop at a small crag to drop off our hiking or ascent shoes and then switch to climbing shoes before continuing.

To climb to the top, we scramble up massive and intimidating boulders. (I sense a theme here with Quartz Mountain ascents.) I’ve never climbed boulders this big before. They’re hard to get around, and on the way, I get stuck.

My nerves prevent me from moving forward on the path (if you can call it that). I think the height of where we are and not wearing protection is getting to me. Plus, I’m not sure if I can reach some of the spots we need to go upward. These thoughts scare me. Thankfully, Kyo from the Texas group backtracks and helps me through the rest of the boulders.

Once we get to the top, the group rests for a while. I’m so relieved to be up there finally. In the meantime, I gaze at the sunset over the horizon. I wish I had my camera to capture the beauty of the view. With the ascent we had to do though, my camera might not have made it.

Are We Going to Jump There?

Before descending the mountain, we have another part of the tradition to do. We must jump six feet down to a boulder below the peak we’re located to get to the ropes. Someone is tied in to catch you, but you still must jump. You can’t slide down the rock. 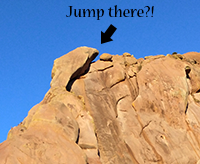 This jump severely freaks me out. I was told about this beforehand, but I didn’t realize how scary it would be. When it’s my turn, I try to convince myself to go. But I think about the “what ifs” for too long. Because of this, I’m too afraid to do it. However, there’s no way I’m downclimbing from here.

The guys behind me notice my fear and try reassuring me, but it’s not helping. One of the guys in the group ahead of us grabs a rope and tosses it over to the catcher and I so we would tie in for security. I think this was to ease my fears.

It’s f**king scary, but I finally jump after tying in and land on the rock. Holy shit, I made it! The guys shout out “give that man a hug!” I ask Preston, my catcher, if I can, and he says yes. I don’t think I've ever been this relieved my life.

Rappeling in the Dark

After the frightening jump, we walk over to a nearby ledge to rappel and descend 200 feet down the mountain. Before our ascent, I borrowed an ATC to descend because a GriGri (which I had) won’t give enough rope slack to get down. Plus, the rope can get stuck in the GriGri but won’t in an ATC.

To rappel the technique is like giving a climber slack on the rope as she/he is climbing up but instead, it’s you who is on the rope, and you’re giving slack to go down. What’s sort of scary about the rappelling is, you’re doing this from 200 feet high and in the dark. I bet because of the likelihood of descending after dark; we needed our headlamps with us.

I descend slowly and steadily down the mountain. I tell myself aloud “nice and easy.” Thankfully I brought my belay gloves and wore them while descending. If I didn’t, my hands would be covered in aluminum dust from being on the rope. Also, I might not have been able to avoid rope burn.

Rappelling wasn’t that bad. However, I have a hard time jumping over a short chasm. It’s because I can’t get enough slack to prevent the rope from pulling me back. Keith, the belayer, pulls me down some but I manage to hop over. Then, the rest of the descent was fine.

Back on Solid Ground

After I reach the crag, Keith and I waited until a few more people come down then we grab our shoes. We scramble down some more boulders to get back to camp. Finally, once we were there, I eat dinner.

Soon after finishing up, one of the guys brings over a bottle of celebratory tequila for participating in the Snakes Head tradition. I take a swig, and it goes down smooth. A small reward for what I'd done.

During the night, my mind wanders back to the top of Snakes Head and am astonished that I even went through with it. The ascent and descent both were amazing and scary. Looking back, if I had a better grasp of what we were required to do, I wouldn’t have climbed it. Now though, I can say I survived Snakes Head.

We get up the next morning, and the three of us contemplate whether we want to climb before leaving. All of us felt sore and bruised from yesterday. Unanimously, we decide to pack up and head out. So, we do. As we drive away, I turn back towards the mountain and think “see you next year, Quartz.”