Why I Find Bouldering Fun

What if someone told you they liked grabbing plastic holds and moving upward on a relatively short wall or feature? Or grabbing tiny pieces of a rock wall and forcing their body to climb in particular (sometimes painful) ways up a small distance? Would you find it fun? Not many do.

However, what I just described sounds like a blast. As you may know, I love to boulder indoors and outdoors. It is something I find enjoyable as crazy as it may seem. In this article, I want to revisit what bouldering is and why I like it as much as I do.

From Peter Beal’s Movement, Tactics, and Problem Solving, “bouldering is a form of climbing that focuses on relatively short routes, typically unroped and often, with the pursuit of difficulty as its primary goal.” However, the difficulty of the climb is not a requirement for the sport. One can engage in bouldering because it looks like fun.

The reason behind bouldering is one “searching for solutions to difficult sections of rock.” That’s where the bouldering term “problem” originated. In other words, one is trying to solve a problem for their climb. Hence this term is used instead of “route” to describe a section of rock.

Bouldering can be done anywhere if there’s something to climb. Such as an actual boulder, the base of a cliff, or an indoor climbing wall designed for it. In climbing gyms, the boulders or bouldering walls range from 7 to 15 feet tall from Falcon Guide’s Learning to Climb Indoors author Eric J. Hörst. Thankfully if one falls, it’s not from too high of a height.

A Different Kind of Enjoyment

Something I’ve noticed since I’ve climbed for a while now, I still prefer bouldering to toproping. I like it better because it’s just me and the boulder. I feel strong when I try hard on problems. It’s not that I don’t when I toprope because I do. I use my whole body to move and stay on; this makes me feel confident. Plus, if someone falls, it’s me who’s falling off.

Consequently, bouldering, in my opinion, is tougher than top-roping for a couple of reasons. First, if you fall, you start back at the beginning. This realization sucks after attempting a problem multiple times. It can be frustrating. There are some days toproping is easier than bouldering.

However, it’s worth it once I break through and send. It gives me a sense of accomplishment, especially if it’s a hard problem I’ve been working on for a while. I’ve slowly realized bouldering, like any other sport, takes a while to learn and master.

Second, bouldering can seem intimidating because when you watch someone boulder, it gives a false impression of needing a ton of strength to perform well. Especially for women, this sport appears to be too challenging to participate in, and it’s a “man’s sport.” You do need some strength but having a solid technique, I believe helps more in the long run. Women are as good climbers as men and excel better in performance.

Another thing I like about bouldering is one doesn’t need a whole lot of equipment to partake in the activity. If you’re bouldering indoors, all you need is a pair of good shoes and climbing chalk. However, if bouldering outdoors, there are a few additional things necessary to make the experience fun and safe. Such as a crash pad and a bristle brush to brush away excess chalk from the rock according to Beal.

As the old saying goes, “what goes up, must come down.” In bouldering, this is true. One can come down from a boulder or wall by downclimbing or jump off. Depending on the person’s comfort level, either method works. For me, I do both. However, if I’m at a higher spot on a bouldering wall, I do have the occasional tendency to freeze up. I tell myself “I’m not that high” then jump off after downclimbing.

When jumping or falling off, there is a way to land so that one can avoid injury. Beal states that “the first principle is protecting the important parts of the body.” Those important parts are the head and the neck. The second is “safe absorption of energy by finding ways to deflect the impact and disperse the force of the fall.” In other words, the lesser the impact on the body, the better to minimize pain.

How to Fall the Right Way 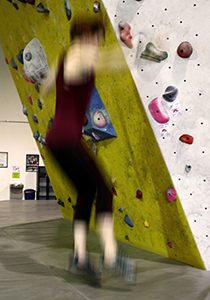 To safely fall: look at where you’re going to land. Try hitting the mat or pad barely with feet flat, bend the knees immediately, then roll onto the side. Let it take most of the impact. Beal mentions this is the safest way to fall.

Don’t resist rolling. Withstanding the urge could injure the feet and ankles. Also, don’t lead the fall with the hands, elbows, or shoulders. It feels like an instinct to do so, but it can lead to damaging them. Along with that, they take a long time to heal.

My fear of heights as I climb to the top of taller problems is still a struggle to overcome. With time and practice, I’m very slowly getting better about it. I try to plan how I’m going to move on the wall. As I climb, I’m more aware of my technique and keeping my cool if I start to get nervous. I’ll break through eventually.

To Each Their Own

Bouldering can appear to be daunting to people, and that’s understandable. I get that it’s not for everyone, but it’s worth at least trying. You might surprise yourself, or at least I did when I first started climbing. Until next time, happy bouldering!