Climbing shoes take a beating when you’re on the rock or the walls and will show it. In “Fixing My Climbing Shoes Part One”, I covered the parts of a climbing shoe you should know. This information is helpful, especially if you need to send them in for repairs. That leads us to the big question.

When Should I Send Them In?

The big question is, when should I send my climbing shoes in to get them fixed? ThoughtCo.com writer Stewart Green gives three area to check when examining your shoes. If you need a refresher on shoe parts, refer to the shoe diagram from Part 1

Look at the toe and front edges of the sole.
The toe rubber wears down the fastest because this is the part of the shoe that we use the most when climbing. If the toe rubber is worn down about 80% compared to the rest of the sole, it’s time to get new soles. Likewise, you need new soles if any small holes are beginning to form in the toe rubber. Don’t wait until the holes get too big and down to leather.
Also look at the rounded edge of the sole around the toe box. Don’t wait until the edge gets down to the rand rubber. If you’re climbing on that, you will need to replace the rand as well as the sole.
Look at the rand.
The rand is the strip of rubber around the shoe above the sole. Pay attention to it as well. It usually gets worn when you scrape the shoe against rocks or jam it into cracks. If holes begin to form in the rand, you’ll have to get a replacement rand.
Also, see if the rand is separating from the upper part of the shoe. Usually, the shoe cobbler will squirt glue in the gap to keep the rand and upper together. Also, look where the rand and sole meet to see if it is coming apart there.
Look at the rubber.
Climbing rubber sticks to rocks and helps us grip better. Look at the rubber on the sole. Is it getting thin? Does it have loose, ragged edges? Does it have a pitted appearance? Is the rubber soft and squishy on the rand on the toe box? Any of these symptoms might indicate the need for new soles.

The first two points Green mentions are where I don’t pay as much attention as I should when I’m checking my shoes. Because of my lack of care and probably laziness, I let the rand of one of them get a hole. I don't want it to get any bigger than it already has. The rand on the other shoe looks worn as well. 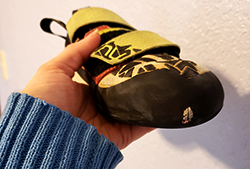 The next question you ask yourself is, where do I want to send them? Depending on where you live, you might need to send them out-of-state. Most climbing shoe repair/resole companies are in California and Colorado (where there’s a lot of climbing). There are some on the East Coast, but I haven’t investigated them.

The place I sent my Miuras last year was Lost Soles in Houston, Texas. I shipped them there was because someone mentioned it in a climbing group on Facebook. I went with Lost Soles also because I thought I would get my shoes back sooner. I’m hesitant to send the Otakis there because when I got them back, my Miuras didn’t fit right, and it took a while to break them back in.

In the meantime, I’m researching resole companies just in case I don’t want to send them there. If I don’t, I’ll let you know where I sent them. I will have the rand and sole of my left shoe replaced because of the hole in it.

Before sending in the shoes, resole companies require you to fill out a form stating the damage done. So, they have a better idea of what repairs need to happen. On it, they usually have prices for which part needs repairing. Half soles range from $35-40 — rands from $10-15. If your shoes have a specific rubber, you can request they use it.

Trust me; this is a lot cheaper than buying a new pair of climbing shoes unless you destroy your shoes beyond repair. Plus, you shouldn’t have to worry about breaking them in. I do wish there were resole businesses closer to me, but I do what I can.

The Waiting is the Hardest Part

One thing though that does suck about sending your shoes in is the wait time to get them back. Depending on how much repair they need and how busy the businesses is, it can be anywhere from 4-8 weeks. Hopefully, you have another pair to climb in. For me, I’ll be wearing my Miuras until I get my shoes back. It’ll be weird because I haven’t worn those in a while so my feet will have to readjust to a more aggressive shoe.

When I get my Otakis back, I’ll update you with the details and how they fit since. I’m a little nervous, but I’m sure they’ll be fine. Until next time, happy bouldering!