Holding On: How to Stay On to Handholds

To move upwards whether on a boulder or wall, one has to figure out the best way to grab on to handhold/holds. I covered some of this in Climbing Holds: What Can I Hold On To?. However, here’s where I would like to explain more on the topic. Some holds should be held onto differently than others and I’ll tell you why.

Take for example, one approaching an edge. I stated in “Climbing Holds” crimps and edges usually force hands into a “crimp” shape. This results in the knuckles just behind the fingernails settling into a closed position at about a 90-degree angle. The tip of the finger to the first joint is on the flat part of the edge and as the second joint is sticking up. The thumb is against the pointer or on top of it and the wrist bent back for leverage.

According to author Peter Beal in his book Bouldering: Movement, Tactics, and Problem Solving, another way to grip edges is what’s known as an open-hand grip. Or also called an open-hand crimp. Think the tip of the finger to the first joint hanging of the edge with the fingers close together. Beal says open-hand crimping is actually the preferred grip on edges because it doesn’t put as much strain on the fingers. Beal also states that crimping works well but “it’s the most injury-prone hand position.” Raised knuckles exert a lot of force onto the finger tendons which increases the likelihood of strain or tearing.

Sidepulls are for pulling towards yourself while maintaining an oppositional force. You oppose the force that your hand and arm exert on it with the opposite hand or legs and feet. Try pinching the edge to help secure holding on to it. As helpful as this might be, it can be also strenuous. So it’s best to move through this hold quickly and not lose too much energy over it.

Pinching can make a huge difference when grasping on to poor holds. Pinches are great for this. Now the size may or may not matter but pinching can definitely improve it. It does help to have one’s feet on good and supportive holds to relieve some of the strain and pull from the hands.

My least favorite kind of hold. For slopers, constant force must be applied onto the hold to hang on. Having the hand spread out on the hold helps too. These kind of holds one wants to spend little time on it also. If there’s any sort of texture on it that can benefit hand friction, use it. I have found that either spreading my hand out then pushing onto the hold helps stay up for a little while. Or if the sloper is in close reach, wrap my arm around it to give me leverage then reposition so I can push off from it.

Not only are the hands a key factor in figuring out the best way to hold on but so are the arms. The arms are what produce leverage, torque, and of course upward movement. There are 5 basic arm positions climbers should learn according to Learning to Climb Indoors author Eric J. Hörst: 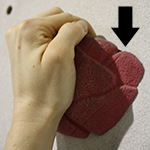 This is the most frequent arm position used and the first to learn in climbing. Basically, one would start grabbing on to a hold or holds above the head with the palm facing the wall or rock. From here, one could pull downward to move upwards or if they wish, just hang from the hold. This pulls the body in close proximity to the hold(s). It sort-of feels like doing a pull-up with the holds.

Opposite of the down pull, mantling starts with the arms in a bent position near the torso and then push downward with the palm. Picture pushing oneself up and out from the edge of a swimming pool. That’s another way to mantle. One might mantle off of a sloper if it’s big enough to do so or sometimes on top of a pocket. Another time one would mantle is reaching the top edge of a boulder or a ledge.

In terms of holding on to it, the undercling is self-explanatory. One has to grab the hold with the palm up and either pinch it or half-crimp, maybe open crimp. It’s best to hold these near the torso so it’s by one’s center of gravity. If one can get a good opposite foot placement, this move can be pretty stable.

How one should grasp this particular hold was mentioned in “Climbing Holds”. Sidepulls are positive when one is pulling towards her/himself while maintaining an oppositional force. One can oppose the pulling force that the hand and arm exert on the hold with the opposite hand or legs and feet. One can hold on to two sidepulls at the same time and pull inward to keep balance and leverage. But one will need to use good footwork to keep moving.

Gastons are a more difficult arm position to use. It is viewed as a bent-armed, elbow-out position with the hand gripping the holds thumb-down. Instead of pulling towards the body, one pulls away from it on the hold. Picture pulling two sliding doors away from each other at the same time. If one comes across a right-facing vertical edge in-front of themselves, he/she should grab it with the left hand with the thumb down then pull outward to the left. I don't think this move was named after the Disney villian from "Beauty and the Beast". However one might need strength to do this move so I guess the name fits. This particular move is hard on the shoulders so proceed with care.

Just as important as figuring out what hold to grab onto next is thinking where one’s feet are going too. The arms and feet need to work together to maintain balance and grip on the holds. Sometimes there isn’t a good handhold, but a better foothold nearby that will allow one to move upward. Fancy footwork is what I’ll cover next time.