We pair up at the anchored ropes as Cruz gives us our first belaying lesson. Cruz explains when belaying, there’s a climber and a belayer. Starting out, the climber clips one end of the rope with a carabiner attached to it. It’s a metal loop with a spring-loaded gate.

Continuing on, the belayer watches the climber as he/she ascends. This person controls the ropes for the climber and is also hooked to the harness via a carabiner. Exerts tension on the ropes while the climber moves upward. Also keeps the climber from dropping to the ground. 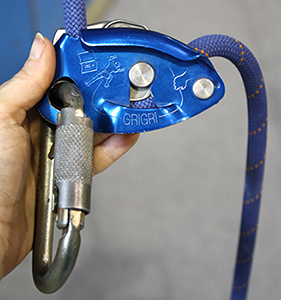 Cruz then demonstrates how the ropes run through a device called a Grigri attached onto them. The Grigri is an assisted-braking belay device. Which means it stops the rope with a camming device that clamps the rope in case of a fall.

He says when pulling, one hand is on the rope at all times. For right-handed people, the left hand pulls down on it so there’s no slack for the climber. The right pulls the rope out from the Grigri. For left-handers, the hands are reversed.

Cruz lets us practice with the ropes so we get comfortable with them before climbing. Then we pair off and hook up to the belay ropes. Tim says he would climb so I take control of the Girgri

However, before we start, Cruz talks about communication between climber and belayer. He shares with us terms both parties use to signal when ready. The climber says “on belay” in which the belayer responds with “belay on”. Once the climber is on the wall, to let the belayer know, the response is “climbing”. The belayer then answers with “climb on”.

Next is braking with the cams. Whoever is climbing stages a fall so we practice this too. Even though it’s planned, I'm still a little nervous. I keep thinking “do not drop him.” I find out I’m good at braking when Tim decides to fall. As soon as I see him start, my hand automatically jerks the rope downward. I'm complimented for my quick reflexes but am also told I don’t have yank on the rope. I pull the lever from the cam and slowly lower Tim down. That wasn’t so bad at all. 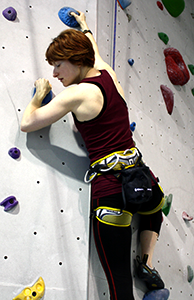 Now it’s my turn. I hook up the carabiner to my harness and wait until Tim is ready. “On belay” I say. Tim responds with “belay on.” “Climbing” I say back. “Climb on” says Tim. I grab onto the hard plastic holds, look up and start climbing. I follow the color-coded route with its odd shapes as I think about how to hold on to them and pull myself up.

I move up for a bit then hear Cruz tell me that I need to start falling. Well, crap. I’m not a fan of falling. Coincidently, my foot slips on a hold and I lose my grip. I fall and Tim breaks it with the cam. Instinctively I grab onto the rope for dear life and scream a little. But I calm down as Tim lowers me to the ground. I assure everyone I’m fine and laugh it off. Cruz watches us for a while longer in case we had any questions for him. We don’t so he lets us be.

We take a break and figure out what to do next. I gravitate towards the auto-belay next to where we just had our lesson. An auto-belay is a lot like belaying but you are lowered by a pulley and don’t need a belayer. However, if you fall, you’re not stopped but lowered back to the ground. I hook up and start the green route. I think “left, right, left, right” as I reach for holds to grab on to. They’re big enough to where I can hold on to them comfortably. But I have problems deciding where to put my feet. I get about halfway up and slip. I fall then lower to the ground.

Ok, I try the route again. “Left, right, left, right.” Stopping often to check to see where my feet are going to go. I pull myself up hard, stretching at times to grab holds almost out of reach. Before I knew it, I make it to the top. I smile as I slap the wall and let myself drop back down. I’m sweaty from the workout but man, this is fun. 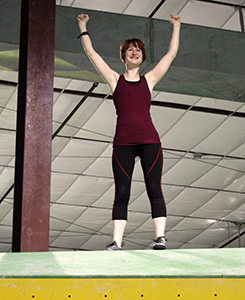 I try climbing a few other auto-belay routes before I wander over to the big boulder. By this time, I think I’m getting the hang of climbing. I chose a red colored problem route that looks doable. My feet slip on the holds a couple of times but I finally get my balance back and start moving upward.

The holds are good as I climb but it’s still a workout. I actually make it all the way and see there are two hold to help get onto the top. I pull myself up and over the edge then slowly stand up. “Yes!” I have a “I’m the king of the world!” moment as I throw my arms up and look around the gym. Not caring if I look like a dork. I walk over to an end of the boulder that had a specific climb down route so I could get off the boulder. After a climbing few more problems, I’m feeling pretty beat and winded.

So, my overall thought of my first day climbing is that I would definitely come back. I’m glad I got to go and try this out. Now the million-dollar question is, how sore was I the next day? Find out next time as I catch the climbing bug and my love for climbing starts to grow.