Threshold Climbing Gym and Yoga stands tall as we walked towards the front doors. The building had the "new" smell inside the entryway. To an onlooker, it was organized chaos. People huddled around the check-in desk where staff members directed them where to go and passed out raffle tickets. Others were walking in and out of the doors. We waited our turn to receive our tickets for food and the drawing after the competition.

We walked through another set of doors to where the gym started. I signed in at the registration table around the corner and grabbed my score card. There were ranks for beginner, intermediate, advanced, and open. Open was for the supermen and women. For my first time being here, I played it safe and circled beginner. Now, time to scope out the area.

This place was huge. Off to the side, I saw the roped routes. They scaled somewhere between 60-70 feet high. Another side held the high-ball bouldering walls that buzzed with activity.

Climbers of all shapes and sizes gathered around the bouldering walls and structures. Hands waved in the air as if they were figuring out an invisible puzzle. Beta and words of encouragement rumbled under the blaring, almost obnoxious upbeat music from the overhead speakers.

I gathered my own beta while walking around, taking in energy and excitement from the other climbers. After a while, a voice came over the intercom asking for climbers to meet up at the front for announcements. We gather around and listen to the instructions for the competition.

The format of the comp would be known as red-point. This means climbers can choose which problems to climb when they want to in the allotted 3 hours given to do so. The best 5 scores will be counted. However, if a climber climbs more than two problems designated in a higher rank, then the climber’s category will be bumped up. For example, if a beginner climbs more than 2 designated intermediate problems, he/she gets bumped up to intermediate.

We're told there will be staff members to sign off on climbs or we could have other climbers witness and sign off. As long as someone signs the score cards to show we sent or attempted a problem. Then we are cleared to go bouldering and have fun.

It Goes Downhill from Here

The comp went well for about the first ten minutes or so. Then... it sucked.

I didn’t realize how many people were there until we headed to the bouldering walls. It felt like to me it was a little disorganized to try to ask someone to watch. I couldn’t see any of the staff members to ask. Plus, contrary to popular belief, I’m kind of shy. So, walking up and asking people isn’t my thing.

Eventually, I found someone I sort of knew from Climb UP to ask and she said she would watch me. I decided to start an intermediate problem and get it out of the way. I feel the holds are good and the problem itself isn’t too complicated. I almost make it to the top.

I reach the second highest hold. I realize I misjudged how far the last and second-to-last holds were from each other. Shit.

In addition, I miscalculated where my feet could go so I could grab the final hold with both hands. The hold is marked to indicate to match there. I could reach with one but not the other. I felt like I would fall if I leaned over. Because of that, I began panicking.

I shook my head to signal that I wasn't going to complete the problem. I tried to downclimb then jump off. I wasn’t comfortable jumping from that high. The walls are 15 feet tall. I jumped anyway but didn’t realize a foot was still on a hold.

Having my foot on the hold may have caused me to fall wrong. Ideally, one should land feet first then roll over. I think I landed first somewhere on the back of my right shoulder. (I fell so fast, I’m still not sure what I did land on.) My head went back at some point either at impact or right after.

Pain shot through my neck. It hurt like hell to turn in either direction. I think I tensed up from hitting the mat. Somehow I managed to get up and told the climber to put the climb as an attempt.

I walked away from the crowd. Kept my head down so no one saw the tears streaming down my face. My husband follows from behind. I headed to the cubby that held my stuff. I tried to gain my composure but the pain from my neck made it difficult. I forced myself to move my head around for fear of my neck stiffening.

My husband tries to comfort me. He’s worried about what just happened. I excuse myself to the restroom to dry my tears off and test where it hurt the most.

As I looked in the mirror, I gain some composure as I rotate my right shoulder. The pain wasn’t coming from there. I turned my head, I confirm the neck is what’s hurting. Might have pinched a nerve and that’s what’s causing the pain.

Should I Stay or Should I Go?

I walk out and start wrestling with myself about whether I should continue or not. My neck hurt like a mo fo. Anger builds because, in my mind, I did something f**king stupid. Fear is right next to it because of the possibility of falling again and screwing my neck up even more. Pride was getting in the way too. Because this is what I came to do.

In addition, it didn’t help that most of the problems were on high-ball walls. The height got to me, making me freak out. 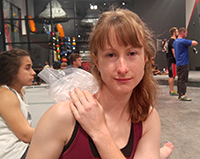 After mulling it over, I shoved my pride and anger to the side and chose to withdraw from the comp. The risk of hurting my neck more was too great. If it was almost any other body part, I could have rested and iced then gone up again. But not this. It sucked big time. However, there really wasn’t much else I could do.

With a heavy heart, I went to look for a staff member to give my scorecard to. I found a manager and explained what happened. He asked me if I wanted a bag of ice and I graciously accepted.

He found one and gave it to me. Then he asked if I could fill out an injury report and I said sure. My husband and I grabbed pieces of pizza there with our food tickets while he went to go get it.

The manager found us and I filled out the report. I kept it on the positive by saying it was a fun place. He asked if I had been there before and I said no. He thanked me for coming and said he hoped to see me again at another comp.

I decided we would stay until the event was over. It did hurt watching the other climbers send the problems. A small part of me was kicking myself for not sucking it up and continuing. But the other part of me thought I made the wiser decision. After the competition ended, there was a raffle held for prizes and swag. We left right after it was done.

Honestly, I didn’t want to write this article because of how disappointing things turned out. I was looking forward to this event and hoped I would do well enough to make to finals. My pride was my worst enemy that day. I kept thinking “you came here to compete, damn it. What the hell?”

But not being able to turn my neck after my fall scared the shit out of me. As I mentioned earlier, if it was another body part, I don’t think it would have affected me as bad. The mats at Threshold were super thick to cushion falls but falls from almost 15 feet high can still do damage. My neck is beginning to feel better after being on Aleve plus hot and cold packs for a few days.

I will admit, freaking out on the problem didn’t help at all and was the root cause of the situation. I got caught up in my fear, didn’t breathe, and think it through. That is something I need to work on. Especially since I have the summer State Games at the end of this month.

Figuring Out My Fears

What I plan to do now since I’ve had time to think about it is address fear during my sessions. I need to get on the high-ball wall and force myself to climb more problems there. If I start to freak out about the height or can’t move anymore, take a breath and think it through. If I need to climb down, just make sure my feet aren’t on the holds anymore and jump.

It will take some time but I hope to make progress before the State Games. It’s been rough but I’ve bounced back. I’ll keep you updated with my training and any updates along the way. Until next time, happy bouldering!