A Return to Competitive Bouldering

What do you get when you have a large bunch of people in a big room with a ton of plastic holds drilled onto walls to climb on and only a limited amount of time? A bouldering competition.

As I mentioned in a previous social media post, it’s been a while since I last competed. So, last Friday was my first in about a year and a half. So, you’re probably asking how did it go?

Overall, the competition was somewhat fun. It felt good to be in a competitive setting again, but I was still nervous. There were a lot of kids competing when my husband and I arrived at Threshold Climbing and Fitness. The schedule was that the youth climbers competed first then the adults. However, there was a lot of overlap when one group finished, and another could start.

Because of the overlap of start times, the adults began climbing when the youth were still going. This overlay, I thought, was a problem, and it led to longer wait times to climb. I guess one can look at it as more time to rest, but it took longer to get onto a problem. We had three hours to boulder but wait time does add up.

I competed in the intermediate category because I felt that’s where my bouldering skills are. The top five scores are for placement at the end. However, one could be bumped up or down (I found out) a category. I noticed there wasn’t a good transition from recreational/beginner boulder problems, which were grades V0-V1 to intermediate, which were grades V2-V4. I do wonder if the grades at the Summit gyms are softer than Threshold.

There were 7 or 8 problems marked in the intermediate category. Some were kinda fun, but others I wondered, “did they think when they set this one?” I attempted all but two intermediates. I didn’t send any because they were hard, or my fear of falling got to me. I tried to break through and at least make more attempts but didn’t help me in the end.

Another issue I witnessed was that there weren’t enough judges to watch competitors and score them. In the competitions I’ve been at, there were judges (or someone watching) who scored the climbers or had an honor system which meant you scored yourself. At some point, another judge would come over and help split the pile of scorecards, so the first judge could have a smaller area to cover. You would think that Threshold would have planned and made sure there were enough judges so this wouldn’t happen during the event.

Eventually, I got too tired to climb and turned in my scorecard. My husband and I left the gym and walked across the street to eat at a local pizza place. I was hungry and needed a break for a bit. After dinner, we walked backed to watch the finals for the top overall scorers. That was fun to see.

A Mixed Bag of Feelings 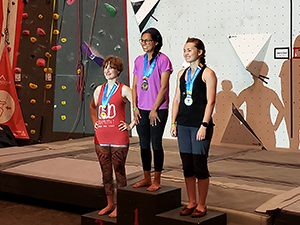 After finals, awards were given to the top 3 climbers in each category. The announcers started with recreational first, and the name they called for third place was mine. Wait, what?! I went up to the podium very confused but accepted the award and smiled for the camera when the event photographer took our picture. So, this means I was demoted a category, seriously?

The realization hit me hard. I don’t know why I was awarded. It should have gone to a climber who competed in recreational and earned it. I did poorly as an intermediate climber and didn’t deserve the award.

It would have been better if my name wasn’t said. At least I would have left the gym knowing that I didn’t place in intermediate. I felt so ashamed, angry, and put off guard because I didn’t see this coming. The ride home was silent. I didn’t feel like talking because I was trying to sort out my emotions.

Once we got home, mentally, I wasn’t in a good place. I wanted to crawl into bed, hide under the covers, and cry. It was a huge blow to my ego, and it hurt. I kicked myself because I didn’t push harder and did badly. I felt like a complete failure and thought I should stop competing.

My husband comforted me as best as he could. Sometimes I wonder how he puts up with me. He said, “you’re not a failure. … It will hurt a little less tomorrow.” I wasn’t looking forward to telling anyone what happened, including writing about it for this article. It still stings as I type this but not as much as before.

Whether or not I continue to compete will depend on a few things: how I can improve facing my fear of falling, how willing I am to drive a distance to compete (possibly at another Summit location in the fall), and how and if I can get time off to travel. I’m not sure if I’ll compete at Threshold again because there’s a growing trend of bad memories from that gym. But I guess I figure that out if I cross that bridge.

As far as I know, there aren’t any bouldering comps scheduled soon. This is a good thing for me because I don’t think I’ll be ready for a while. I want to heal before throwing myself back out there again.

In case you’re wondering, I am doing better since the comp. Thinking about it still hurts a little. We received medals as prizes, and I don’t know what to do with mine. It feels wrong to keep it, but at the same time, it feels wrong to dispose it. I may hide the medal away and hopefully, forget about it.

I don’t need a reminder of what happened. The memory will stick with me for a while.

Until next time, happy bouldering.