What if you could climb on a problem or route you created? Would you do it?

At my gym, I’ve been dabbling in something called routesetting. What’s that? It’s the act of taking down climbing holds and putting up new problems and routes in an artistic manner in a climbing gym. A routesetter/setter is one who’s tasked or holds the position of doing this job.

Climbing gyms want a variety of routes/problems to keep it interesting. It gets boring after a while if no new stuff is put up and you feel like you’ve done the ones already at your capacity. So, that’s why we do it.

At my gym, the routes or problems change once a week. The setters take down large sections of the walls in the fall and spring. Not as much during the summer unless there’s a competition scheduled.

Why Do I Want to be a Routesetter?

I bet you’re wondering why I’m interested in it? It’s something I’ve wanted to try for a while. I want to create and have routes or problems with more shorty beta. It’s very hands-on because you are the one placing the holds and screwing them into the wall to create what you envision. That’s something I’d like to participate in at work. 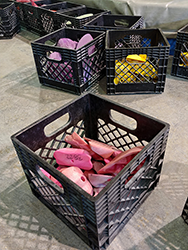 There are two parts to routesetting: the stripping and the setting. Stripping means removing the holds from the wall(s). Setting is planning and placing the holds. This process takes a day and a couple of hours to do. The night before, the setters strip them down and then the next day, they put up new ones.

How do you take holds off the walls or add them? We insert a drill with a bit or hand wrench into the screws inside the holds to loosen while stripping or tighten when putting them on. It doesn’t take long and isn’t hard to do. However, using a drill is faster than the wrench.

Before the big move, I was coming in on my day off or before my shift and learning how to routeset. Adam, the head routesetter, told me when it comes to setting, there are four things one needs to keep in mind. Those are:

You are watching your movement when you’re climbing on the route. Making sure there aren’t bad landings or anything that leads to significant injury. You’re watching how you and others fall from it. The goal is not to make the climber perform risky moves to get to the holds.

For example, traversing with dynamic moves. One can create too much momentum while swinging and jumping to the hold. They can land wrong if missed or pull muscles while doing this. Or dyno-ing to a mono (one finger) pocket hold. That’s a small area to hit and can damage finger muscles if not done right.

Questions one can ask are does the route make sense? A factor to keep in mind is what range of climbers that can do it? Which moves are people going to use? What’s the reach like for a person? Is the flow good?

When creating problems or routes, what grade do you want? That will dictate which holds you’ll want to use. To paraphrase Adam “positive/easy (good) holds; shitty holds, hard route.”

Alongside how functional a route is, should be its aesthetic. One wants to put similar holds together of look and feel, not a random collection. It helps to group holds once you know what grade you’re putting up. Ex. Footholds, positive, negative. Plus, the direction it’s facing will make it easier or harder for one to grab.

The walls themselves also make a difference. Are you setting for a vertical, less than vertical, slab, or overhanging? If you’re using volumes, set those first the rest. Climbers will base their beta on what surface they’re going up on and the holds too. So, there’s a lot to think about when putting these up.

Overall, is the route or problem fun to climb? Do you like it or not? What makes me come back to it? You don’t want to make it too straightforward and boring.

I’ve shadowed the guys on a couple of setting days, so I can learn about routesetting and watch how they do it. And in the meantime, be helpful around them. One day I came in, and Adam tells me that I’m going to put up a few problems on sides of the bouldering island they were working over. This news was unexpected.

He tells me I’m putting up a V2 on the slab face and a V3 around the corner on the vertical wall. How I want them to look is up to me. I wish I had a heads up, so I didn’t waste time trying to figure out what I wanted to do.

Once I started the V3, I somewhat had an idea of which holds I wanted to use. Crimps are my thing, so I wanted them as handholds. I set up the problem on a mostly vertical wall. However, it traverses around an arete, so one could use the edge if needed. Balance helps to get up the wall. The mantle for the topout turned out harder to than I thought, but it worked.

Then, I started on the V2 problem. Slab surfaces are less than vertical. They’re known to make you work your balance and trust your feet more. You want to lean into the wall for support but move to not to slip and fall off.

I look for small but decent holds for hands and feet. How far I want them spaced out it where I run into some trouble. I don’t want them too close because that would make it easier but at the same time, I don’t want them too far apart. The problem did end up kind of like a ladder, but the holds are small enough that they aren’t great to hold.

I get a moment to look at my creations and think I did a good job. I hoped they met the criteria and not changed drastically. They'll get tested soon enough.

So, how did my problems hold up? Come to find out, what I did is just the first draft. In my next article, I'll tell you what happens to the problems after the critiques. Until next time, happy bouldering!