Trying to Send This Route: Getting Through the COVID-19 Crisis Without Climbing

Hi everyone! I wanted to update about what’s going on with me since the COVID 19 pandemic and social distancing has ramped up. Some of this may be old news, so bear with me. However, I wanted to dive a little deeper and let you know what’s really happening.

When I first heard about COVID-19, I was concerned but not worried about it. I thought it was going to be a bad strain of the common cold or flu, not what’s it’s evolved to now.

Things became intense for me when it started affecting my work. I was an event and social media coordinator for a couple of gyms that are part of an indoor climbing gym chain. There were whispers of concerns from staff and members. I had a pet adoption event planned at one of the locations, and the pet rescue called to tell me they were sorry but had to cancel due to the COVID-19 concerns. I was bummed but understood why.

Just a few days later, an announcement was declared that all events are postponed, complying with CDC regulations. That’s when I knew the company was starting to take COVID-19 seriously. That also meant my work focused elsewhere. All the gyms significantly increased cleaning duties. There was so much disinfectant!

Then things changed. One Sunday night, we were sent a message on our work social media that all gym operations were pausing for the next couple of weeks due to COVID-19 concerns. Wait; what?! We were still getting paid but weren’t allowed to go to work or be at the gyms until the beginning of April. Whoa.

My brain couldn’t wrap around the thought of not being at work for a few weeks. It was kinda like going on vacation but not for the right reasons. This was also about the time “social distancing” was becoming urgent. I’m an introvert, so being at home for some time wasn’t going to be an issue. However, the climbing gym was closed, so there went a huge chunk of my fun gone.

Not climbing for that long was going to be super weird. I’ve taken time off during the holidays or trips, but not like this. I thought this would only be temporary and more like a staycation. Well, I was wrong.

Plus, I wouldn’t get to see a lot of my friends I climb with or other members. Because I worked at the gym, a fair number of people know me, so I’ll chat with them during sessions. You feel a sense of community I’ve never felt before in other social gatherings. I didn’t realize how soon that would end.

Almost a week before we thought we might be back in business, a social media message was sent asking staff to watch a live stream with the owners regarding the next steps with the company during the pandemic. They were transparent with what was happening to the gyms. However, we were being laid off. That felt like a punch to the gut.

Part of me thinks I should have seen it coming; however, it still shocked me and hurt like hell. I was in a daze mentally for the rest of the day. I’m kinda surprised I didn’t drink more alcohol that night.

One Day at a Time 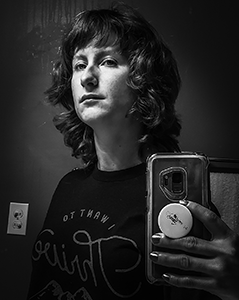 How am I doing since being laid off? I’m doing ok. I’m sleeping in a lot more than I used to. The quality is decent for the most part.

My meal schedule is way off course because of it, but at least I’m eating. Usually, when I’m stressed, my appetite flies out the window, and I don’t eat or only very little. I told my husband to ask me to eat. If I hear it from him, I’m more inclined to do so.

Besides the wacky meal schedule, I’m trying to keep some sort of routine during the week. I don’t do well without one. I must have structure because that’s what keeps me functional.

One day a week, I Zoom with my climbing and wellness coach. She’s been an enormous help to me these past weeks. Part of my routine is hangboarding since I can’t climb at the gym anymore, and I don’t want to risk going outside. I hangboard twice a week to keep my fingers healthy. It’s been so strange, not going to the gym.

Another part of the routine is core exercises. I do them to stay somewhat active because I know I don’t move around as much as I did when I was working. I try to throw in some yoga during the week as well, for physical and mental purposes.

We try to walk around the neighborhood for exercise while practicing social distancing. The only other time we leave the house is to buy groceries or other essentials. Our city has a “stay at home” order due to the pandemic.

I blog about climbing for fun. So far, I’ve been able to produce content since I’ve had to stay at home. I think I have topics I can write or update for a while. Or at least I hope I do.

Not climbing has been rough for me. Not only was it a big part of my exercising, but as I mentioned earlier, my fun as well. It was therapy for me too. Because my focus was on climbing at the gym, whether it was bouldering or on the ropes. Okay, and part of socializing as well. My identity got wrapped around climbing, and it’s like a withdrawal. It’s been difficult shifting gears.

Mentally, I think I’m ok. I’m a little more sensitive than most people, and I’ve noticed myself feeling more emotional. Then again, who hasn’t more emotional during this crisis?

I’ve started meditating for my anxiety, and I think it’s helping a little. I’ve talked to some of my friends and family since this has begun and it’s helped.

This period will suck big time for all of us. All we can do is wash our hands, practice social distancing, and hope we don’t get sick. One of my now former owners said, “we will send this route, we will get through this.” I think we will too; it’s just going to take a long damn time doing it.