When you’re involved in a sport, you’ll have to repair or replace your gear at some point due to wear and tear. For me, it was the latter. My Tarantualce climbing shoes were starting to get a hole on the rand which is at the front of the shoe where the toes are. Unfortunately, I let the hold grow and it went through the shoe. At this point, it’s best to replace the shoes.

For my next pair of climbing shoes, I wanted them to be a little more aggressive to climb better. What I mean by this is having the toebox (the area where the toes are) to be downturned more in shape and appearance. This is also called cambered. Climbing shoes in this form generally perform well for bouldering.

In addition, I wanted to stay with the leather shoes because it gives a little whereas the synthetics don’t. But if I found a synthetic pair that worked for me, I would be open to buying them.

The La Sportiva Miura VS 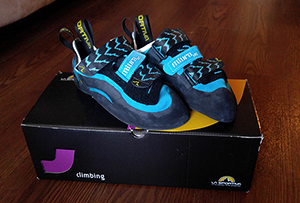 After trying out shoes, I found the pair that fit. Those are the La Sportiva Miura VS

. They are a leather aggressive shoe with the cambered toebox. However, the interior is synthetic but that helps keep the feet dry from sweat. These are hook and loop strapped shoes which are in other words Velcro strapped shoes. I thought the Velcro would be easier to put on and take off instead of having to mess with laces like my Tarantulace pair had. Plus, I didn't want to have to worry about them coming untied.

The Mirua is listed as a good shoe for small edges and pockets which are commonly found on boulder problems. That makes those smaller holds easier to hang on to. Also, it’s a good shoe to have for climbing on overhangs which is nice. 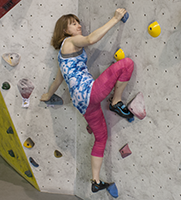 I’ve had my Miuras for 2-3 weeks now and I will say they are a good pair of shoes to have. I have noticed better grip on the smaller holds from the shoe rubber. When I attempt overhang problems, the higher heel cup protects my heel from getting banged up from heel hooking. Personally, I think they are great bouldering shoes. Plus, they look good on my feet which is always a perk. I haven’t tried these outside yet but I hope to in the middle or later part of next month.

I will say though that breaking into the Miuras took longer than the Tarantulaces did. For the first week, I had to switch back to the Tarantulaces frequently until I could break them in. Luckily, I’ve broken them in enough so I’m not having to do that.

One drawback I have seen online and experienced is one really can’t wear these for long extended periods of time. The toes start to hurt and I end up taking them off during rests. So, that is something to keep in mind. But overall, they're keepers.

I hope you find my gear review helpful. Until next time, happy bouldering!