If you have seen me in the gym or online, you might have noticed I’ve been climbing in different shoes. Yes, they are new. And I love them. How did I get them? I’m glad you asked. 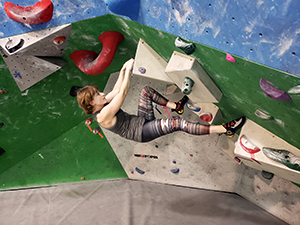 My climbing gym held a Tenaya climbing shoe demonstration a few weeks back. Tenaya is part of the Trango gear brand if you’re not familiar with it. I wasn’t until the demo. They originated from Spain and have a headquarters in Colorado. I was intrigued about the shoe selection they had and was sort of in the market for a new pair of shoes.

Looking for new shoes? Right now, my Otakis are being resoled and won’t be back for at least a month. Which is a bummer because that means I must wear a different pair to climb in. So, I’ve been wearing my Muiras until I get them back.

At the demo, I was looking for another aggressive pair of shoes. You might ask, what about your Muiras? Aren’t they aggressive? You’re correct.

I still like my Muiras, don’t get me wrong. However, the top of the shoebox buckles downward. It’s kinda hard to describe. But the leather digs into the top of my big toes. Most of the time it’s the one on my right foot and it hurts after climbing for a bit.

I’m positive I’ve developed blisters from where it rubs, and it’s painful. I don’t want that anymore if possible.

Here’s the thing, I don’t know when my Otakis will be back, and I want something better for my feet for the upcoming boulder comp in Texas at the end of the month. So, I was willing to look.

At the demo, there were four different types I could try on. What’s cool about attending shoe demos is you can find your size and climb in those shoes for a while. That gives you a better chance to see if a pair is a good fit or not.

Tenaya’s aggressive shoe is the Iati, so that was one I tried on. I was surprised at how much I had to downsize to find the right size. I was told to go down one from my street shoe. Well, I fall in-between two sizes, so I was going for the smaller of the two. Nope, still too big. 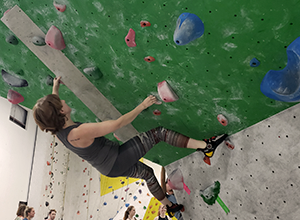 Eventually, I found the right one two sizes later, and wow, my shoes look tiny. I mean, I know I’m petite, but they looked small even for me. They are definitely “fun-sized.”

Once I got them on, I climbed in them, and it was nice to have a pair that didn’t hurt my feet. And they were also surprisingly comfortable for an aggressive shoe. I noticed they are a softer shoe, which means I need to pay more attention to my footwork, so I don’t slip off holds or rock.

They look cool as well. I do like the color scheme better than the Otakis because they’re not as loud.

I didn’t buy the Iati at the demo because I didn’t hear about the employee discounts until the next day. The discount put me over the edge of whether to get them or not. Unfortunately, aggressive climbing shoes are expensive. If I didn’t have the reduced rate, I wouldn’t have bought them.

Climbing in the Iati has been fun. I’ve bouldered and toproped in them. I like how sticky the rubber is and how they fit my foot.

One slight issue I do have is breaking them in. That’s a problem many climbers have after buying new climbing shoes. I do have to take them off after a while because of my toes curling. But besides that, it’s not that bad. The shoe is breathable. It has natural and synthetic leather, but it won’t stretch as other shoes will. Maybe a little, we’ll see.

I do recommend the Iati and really like them. They are pricy, I admit, but it’s an excellent aggressive shoe to have. It will be weird once I get the Otakis back and wear them again after climbing in the Iati for a while. I’ll cross that bridge when I get there. However, I’m keeping both pairs for a long time.