Some friends and I are carpooling to Quartz and camping not too far from the crags. It’s only $3 per person per night to camp, and the money will cover for shower use too. Getting a place to camp for under $10 is a good deal.

Finally Getting to Go

This year is the first time I’ve had an opportunity to go to the Gathering. In previous years, work prevented me from attending the event but not this year. Plus, I’ve never been to Quartz Mountain before, so I’m super stoked. I’ve heard the event is a lot of fun and a big deal in the Oklahoma climbing community. I don’t know how many years the WMCC has been hosting the event, but I’m under the impression they have for a while.

My plan for this week is to get my camping and climbing gear around, so I don’t forget anything. What’s cool about this trip I’m taking is that I’ll have more outdoor climbing experience under my belt.

It will be very likely that I will be doing a lot of roped climbing at the Gathering. From what I hear and from previous research I’ve done on the area for my Where to Climb in Oklahoma article, many of the routes at Quartz are trad climbing routes. There are sport routes out there, but I don’t know what the conditions are for them. However, I hear there will be routes set up for us by the WMCC members. Thankfully, we won’t need to worry about setting up our own during the event.

Hopefully, I’ll get to boulder while I’m at the Gathering since there are problems at the park. However, I don’t know where at Quartz we’ll be climbing at and may not know until we get there. So, I might have to play that by ear. 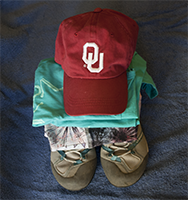 Not only will I need to make sure I have the right gear but also bring suitable clothing to wear this weekend. I’m trying to pack clothes I can climb in but hopefully won’t overheat in. Also, having additional layers to wear for hanging out at night.

Lately, cooler temperatures have hung around, and it’s been feeling like fall here. However, this weekend’s daytime temperatures are forecasted to be much warmer, so they might make climbing interesting. There’s an old joke about how in the Midwest one can experience multiple seasons in a week. Well, Oklahoma isn’t any different from that. I’m just going to have to keep an eye out on the forecast.

Having Fun Off the Grid

While I’m at Quartz, I hope to take pictures of the trip and climbing. I don’t know what kind of cell service I’ll have this weekend. It’s possible I’ll be off the grid for a couple of days. In that case, I may not be able to upload or post anything until Sunday night or sometime Monday.

Overall, I’m looking forward to this trip and hope it will be fun. I will post about the Gathering as soon as I get the chance. Until next time, happy bouldering!