My Thursday started early with morning flights from Oklahoma City to Las Vegas then Reno. My layover in Vegas though was fun. I got to meet Carolyn; she was my ride to Bishop. We connected through the Flash Foxy Women’s Climbing Festival Facebook page when organizing rides for the festival.

Carolyn reached out to me and mentioned that we had the same flights from Vegas to Reno and back. She offered me a seat to the festival, and that was great because I didn’t want to rent a car. I in return offered to help pay for gas. 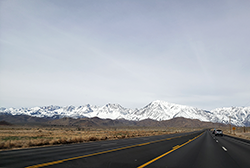 We had a four-hour trip to Bishop. I’m thankful Carolyn drove through the mountains in Nevada and California because I’m not used to it. It was funny though because as we traveled through, we couldn’t tell if we crossed the state line or not. We figured we got to California at some point. We chatted the whole way there, and I took pictures when I could.

I saw so much snow in the mountains, and they were so pretty! A part of me wanted to play in it, but I knew we should keep moving. Another part of me wondered if I should have brought my snow boots for the clinics (I didn’t need them).

Eventually, we made it to Bishop. Carolyn dropped me off at my hotel, and I checked into my room. The hotel itself looked kinda sketchy on the outside. However, the inside was remodeled and clean. After unpacking, I made dinner (we stopped to buy groceries before heading to our hotels) and chilled for the rest of the night.

Friday morning there was a coffee meet-up at Mountain Rambler Brewery for anyone who arrived early for the festival. I grabbed a breakfast bagel and a chai tea at Looney Coffee (I’m picky about coffee), just around the corner from my hotel before walking over. They were yummy! What’s nice about Bishop is that most businesses are on the main drag and easy to walk to and from them.

Once I reached the brewery, people were there already. I grabbed a seat and looked to see who was there. I didn’t know anyone, and none seemed familiar from social media. I did recognize Vicki, one of the event coordinators in one of the groups. I eventually walked up to a group and introduced myself. 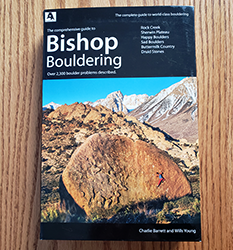 Before long, Shelma, the head event coordinator and creator of Flash Foxy stood up and welcomed everyone then gave a run-down of the day’s plans. The festival wasn’t going to start until the evening. So, we had the day to climb. After her talk, I listened to who was going where, and I planned to find people wanting to boulder. After a short while, I figured out who I wanted to go with that day.

The groups headed out. I hitched a ride with Jess from Ontario, Canada. She seemed friendly. We decided we should buy guidebooks, so we knew where to go and just in case we got separated. So, we ran to a local gear shop that luckily had them in stock, and we each bought one. I didn’t realize they were practically novels because of how thick they were. But we got them and headed out.

The decision was to drive north to an area according to my guidebook Bishop Bouldering by Charlie Barrett and Wills Young known as “The Volcanic Tableland" or "The Tablelands.” It got its name because the rock was formed from a volcanic eruption about 740,000 years ago. “The rock spilled down from its source to the north . . . filling the valley southward.” The terrain is raised above the valley and the town’s edges, hence the term ‘tableland.’ 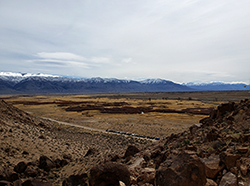 We wanted to go to "The Happy Boulders" aka "The Happies" in the Tablelands. The Happies is a popular area for good bouldering. Apparently, Google Maps doesn’t know the area outside of Bishop well because we kept getting lost. A paper map would have been helpful, but we did find it.

Once we started our approach, I found out quickly that I was out of shape. The trail went up a steep incline and snaked around. It didn’t help that we were at a higher elevation as well. Not used to it at all.

After warming up, we went to the boulder “Heavenly Path.” It’s not a heavenly path at all. This boulder consisted of slab; I’m not a fan. Didn’t want to get on it, so I looked around for things to climb nearby. 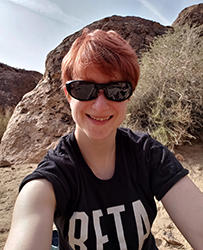 Next to “Heavenly Path” was “More Water, Less Power.” Some of the fun problems were on the overhanging side. I messed around on “Corporation Pop, V3 and didn’t get very far. I hopped on “Vision Aréte,” V1 and got almost halfway through then kept getting stuck. After a while, I moved on to the northwest face and attempted “Happy Hooker,” V0+ (don’t think about it too hard).

I didn’t flash any problems, but I got on them. I kept telling myself that I didn’t have to send. Climbing outside is different than indoors, I remembered that from climbing on Upper Mount Scott. So, I knew it would be harder. I was just glad to get on real rock and have fun. Being out in the heat though, I made sure to take breaks so I wouldn’t be exhausted when we left.

Afterward, we made the trek back to the car. Jess dropped me off, and I cleaned up to go to the welcome party by Mountain Rambler. Showering felt so good! Jess gave me a ride to the brewery, and we grabbed dinner there. The food there is tasty.

At the party, Shelma and Vicki announced the schedule for the weekend. When they finished, one of the athletes attending the festival, Hazel Findlay from the UK, presented a slide show about her background and interest in fear. It was a fascinating topic and kept me intrigued.

When the slideshow ended, Jess and I headed out. We were both tired from climbing, and we knew we had a busy and exciting day ahead of us. It took me a while to wind down, but I eventually got to sleep.

In “Bouldering in Bishop Part 2”, you’ll hear about my first clinic of the festival and what adventures wait for me the next day. Until next time, happy bouldering!