Last week, I carpooled with a group of friends for a climbing day trip at Mount Scott, a mountain just outside of the Wichita Mountains Wildlife Refuge in south-central Oklahoma. I’ve climbed Upper Mount Scott in the spring of 2017 but not the lower part. So, it’s been a while since I’ve done roped climbing outdoors.

We had a small rain scare on the way there, but thankfully it didn’t amount to much. If it did rain a decent amount, it would be too wet to climb, and the trip would have been called off. Luckily, we got to climb.

We parked at the base of the mountain (if you want to call it that) then hiked up the road that leads to the top. It’s closed to motored traffic because of weather erosion, and nothing had been done to fix it yet (to my knowledge). I didn’t know and realized how steep the incline was, and my legs were hurting not long after we started walking. It wasn’t a fun trek.

Eventually, we got off the road and walked down a narrow trail to a spot above the crag where we wanted to climb. We weren’t sure if it was ok to hike to the crag, so some of us decided to rappel down after we got a static rope ready. There were 9 of us, so it was a decent sized group. The rest chose to hike a little farther and see if the trail down was ok.

Come to find out; it was fine to hike down. Plus, it was faster to get to the crag than rappelling since we had a sizeable group. However, the trail was a little overgrown, and you had to watch your footing. Then do a little rock scrambling to get there. Hiking down didn’t help my legs at all.

Once we got to the crag, I sat down, caught my breath, and let my legs rest since they felt painful. It allowed me to grab my lunch and eat it.

Some of the guys set up two ropes so we could toprope a couple of routes. Then it was time to climb. 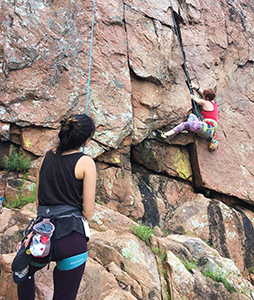 The first route was Mr. Clean, a 5.8. It was a little hard to see where I should grab on the route, but I did find rocks big enough to hang on and step. I should have remembered from climbing in Bishop that outdoor climbing is totally different than indoor. Everything is on, so use whatever you can to send the route.

About halfway through, the route has a crack one can use as a sidepull to move upward. It was a little awkward to start at first, but soon I got into a rhythm and made it through. After a while, I made it to the top. I climbed through with only one stop. I was impressed with myself.

The next route was called Birthday Boy, a 5.7. Its start is weird, but once you got passed it, it wasn’t bad. There were stair-like rocks you could use to send faster. I flashed it, woohoo! I liked both routes for different reasons and would climb them again. The crack on Mr. Clean is cool and Birthday Boy has good places for hands and feet.

It got later in the day, so we decided to call it and grab food. The hike back sucked then got better for my legs as we walked down the road. I was so glad to sit in the car. They were going to be incredibly sore the next day (they were). I’m so out of shape.

We drove to Meers, a tiny unincorporated community near the refuge to the Meers Store and Restaurant known for their burgers and gracious portions. Everything tasted great after climbing. Then we drove back to Norman, got dropped off then headed home.

Besides my legs, killing me as we hiked, it was a fun day. I hope to make more climbing day trips before it gets too hot to climb outside. The more experience I get outside, the better. Plus, it will help get me in better shape. Until next time, happy climbing!