Forerunning What You Created

To make sure something works, you test it first. The same goes for routesetting. Setters go through a process called forerunning after finishing their routes/problems. Setters climb each other’s routes so if need be; changes can happen. They test and tweak before people climb them.

The way Adam explained forerunning to me is what you put up is only about 70% done. It’s like after writing a draft; you go back to edit and make it better. Plus, this saves the setters butts if something needs reworking. A setter can change holds to climb better or adjust movement. She/he can also customize the grade to be harder or easier.

Forerunning also lets you look for alternative moves you might not have seen earlier. For example, searching for shorty beta when the holds are out of reach. You notice what you’re not using, whether it’s skipping holds or are, such as edges or nearby volumes. In the end, you’re making sure it also meets the criteria before signing off on it. 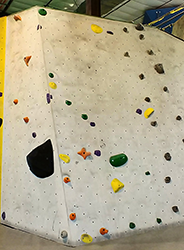 Adam climbed on my V2 first. There were things he critiqued me on. He told me he thought it was too easy and suggested some holds to switch out. There was several of them that didn’t quite match, and the spacing needed work. Adam admitted that slab problems aren’t easy to set. I thought, “why did you make me do it then?” However, I fixed the issues and called it good.

As a side note, slab problems aren’t my favorite. Why because my balance isn’t great which is what you need for them. Because of that, I feel like I’m going to faceplant into the wall if I screw up. So, that’s why I don’t find them as fun as others.

All three of the setters climbed my V3 edge traverse. One thing they agreed on was the holds I used were alright, but they made it a hard V3. They suggested changing the start because it didn’t flow well with the rest of the problem. My overall idea was good; it just needed improvement. So, with their help, I changed the start and added a few more holds to it.

Something I realized after we changed my problems was I should have taken before, and after pictures of them, so I can go back and see what I did differently. Crap. I did get pictures of the V3, but not the V2. The next time I set, I’ll hopefully remember to do that.

Next, I get to climb one of the setter’s problems. The side the problem is on is slightly overhung with a fun start. It had high feet towards the end, and I couldn’t make the mantle. Everyone thought it needed shorty beta.

The guys tweaked the top, then told me I was climbing it again. My thought was, “Wait, what? You’re making me do that again?” However, I didn’t need to start from the beginning. I can use a ladder to get situated on the wall, then one moves it from me, and I start climbing. I got spooked on the mantle, but I didn’t want to show it in front of the setters.

So, I pushed through and topped out. Wow, that was enough. Afterward, we cleaned up our tools and called it a day.

What Would I Do Differently? 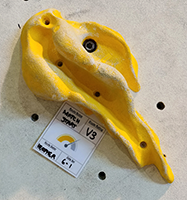 Routesetting is fun, but a lot of work. It’s something I do want to keep doing. I do however need to be in better shape for as much testing, and forerunning as the setters do. Plus, I should build up endurance, so I don’t feel tired afterward.

One thing I plan on is trying to come up with ideas beforehand if I can find out ahead of time which walls are changing. So, as I mentioned in the previous article, I don’t waste time trying to come up with something. I feel that will help speed up the thought process and allow me to start sooner rather than later. In the meantime, learn more about routesetting practices, techniques, etc.

It makes me proud seeing my name on the routesetting tags. Knowing now what I understand, maybe I’ll have more of those before long. I hope to bring you more adventures in routesetting soon. Until next time, happy bouldering!