Figuring Out the Puzzle: Revisiting Routesetting

“Bzzt bzzt. Bzzt, whirl.” Ah, the sounds of drills in the morning.

A couple of weeks ago, Summit offered a ladies’ only routesetting clinic at Summit Plano in Plano, Texas. I found out through Summit’s main Instagram account. I thought it would be a lot of fun to routeset again. The start time was kind of early, but I could make it work.

I haven’t done any routesetting since the Climb Up days, so yeah, it’s been a while. It’s something I’m still kinda interested in, so I thought, “why not?” I signed up and got my spot in the clinic.

So, I drove down Saturday night since I had to cover a shift, then I could leave. I stayed the night with family on my husband’s side who live close to the gym.

Putting the Puzzle Together

The next morning, I got up and drove to Summit Plano. Our clinic had three instructors: Annalise, Nicole, and Christine. Annalise is one of the Summit setters; Nicole is director of youth programs and helps with some setting. Christine sets at Crux Climbing in Austin.

The instructors went over basic safety when setting and using the equipment. They went over routesetting basics as well: aesthetic, grade range, fun, and ability. 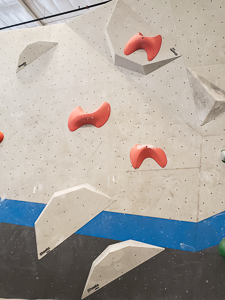 Since there were eight of us, we were paired up into four groups and got to pick an area on the boulder where we wanted to set up our problem. The boulder had two somewhat overhanging spots and two slabs. My partner, Flo-Flo, and I got stuck with a slab. She’s more of a slab climber, so I’d figure that would work out.

It took a bit to get the creative juices going. The setters gave us lists of moves or techniques we could incorporate in our setting and help with ideas. That helped a little.

We decided on a walk up start with techy and balance-y moves. The instructors helped all of us with volume placement and bouncing ideas off when we got stuck. I liked the salmon color of the holds we were using. I haven’t seen it before. After we wrapped up, then it was time to forerun.

We went first; my partner climbed and got stuck most of the way up. I got stuck in the same post because the reach was too far for the next move, and I got into my head. There were adjustments made for sure. Our instructors made it clear to everyone that the purpose of forerunning was to test and work out the problem to see if adjustments were needed. After a handful of tweaks and test runs from other group members, we declared it done. 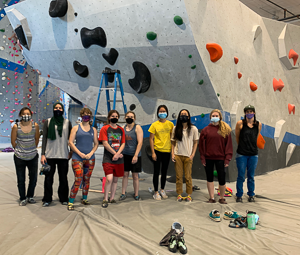 The problem looked a lot more fun after it was finished.

We moved onto the other problems the group created. There were some cool moves in each one of them. I think besides ours, my favorite was the last problem on the overhang. It had a burly, almost bear-hug like move with a huge hold you had to hold and press into before moving to the next hold. I didn’t get to complete it because I had to leave and head back to Oklahoma. I had a meeting that evening and needed to drive 3 hours back to Norman.

Overall, I think the clinic was a lot of fun. It was good to routeset again. If things slow down a bit, maybe I can talk to the setters at my gym and see if I can shadow them to get a little more routesetting experience under my belt.

I hope we can plan a clinic for Summit Norman in the future. I know some ladies would be interested in participating. Fingers crossed. Until next time, happy bouldering!